LD 2 Air Cargo Containers, also commonly referred to as 'cans' or pods are Air Cargo Continers or ULD Containers, are common staples of the airline, avaiation and air freight industries. Often used to load luggage, freight, mail and other parcels onto wide-body aircraft and specific narrow-body aircraft. The containers allow for efficient loading and unloading of the planes, as it allows a large volume of cargo to be packaged inside of a single LD 2 unit.

The LD 2 containers feature a volume of 120 cubic feet. While the LD 2 units are not as common as other units such as LD 3 containers or LD 8 Containers, the LD 2 Air Cargo Containers are compatible with a number of wide-body aircraft.

The LD 2's are interchangeable with LD 8's, whereas (2) LD 2 units will occupy the space of (1) LD 8 unit, which is why LD 2's and LD 3's are known as half width containers. Typically each row in a cargo compartment of a wide-body jet consists of two positions. Thus full-width containers such as the LD 8 will take two positions in the cargo compartment. Interchangeability of specific ULDs between widebody-aircraft is possible in situations where cargo and freight need to be loaded or unloaded quickly to a connecting flight. LD 2's and LD 8's can be loaded into LD 3 aircraft, however there is a loss of internal volume when using the using the smaller LD 2 and LD 8 containers.

Granger Aerospace's ULD Containers offer the lowest total cost of ownership amongst any major Air Cargo Container in the industry. With a number of innovative features such as single piece polymer shells, polyethylene body with UV resistant additives, body available in colors for easy identification, reduced number of fastners, high strength aluminum base and so much more. The Granger Aerospace ULD containers will not only drastically reduce your maintenance costs and frequencies, they will also save money in fuel consumption as the tare weights of the Granger Aerospace ULD Containers are lighter than many comparable Air Cargo Containers. 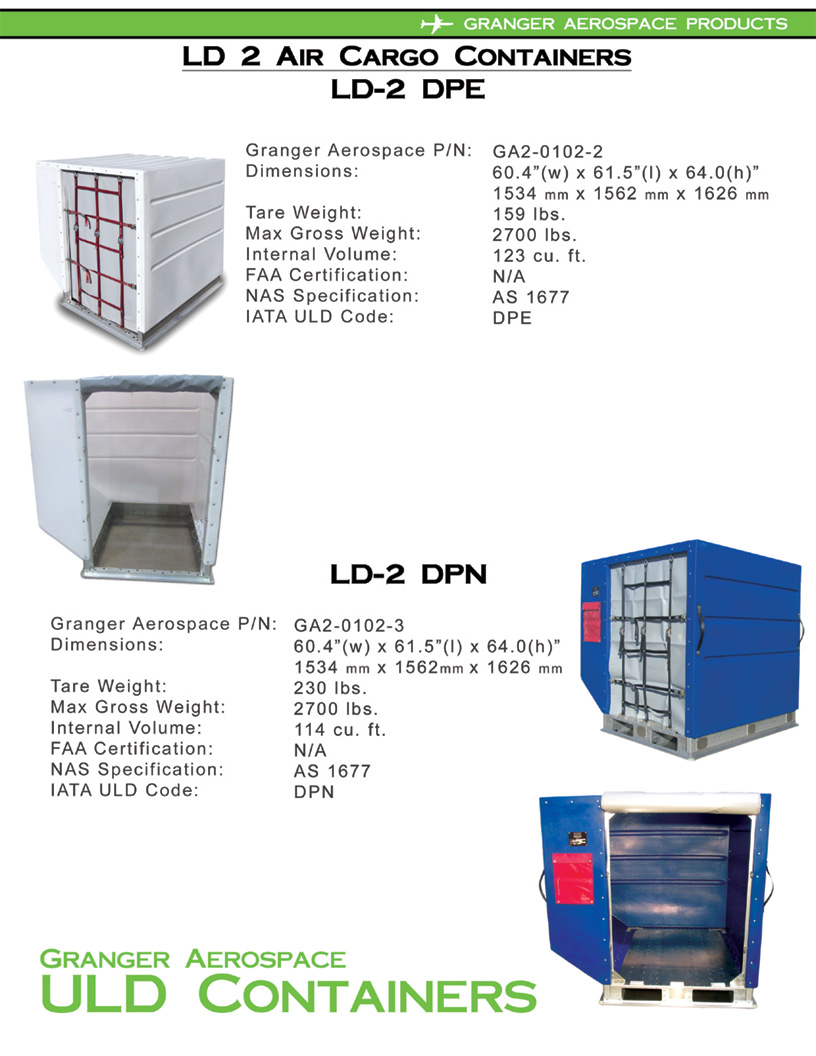